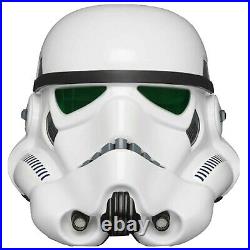 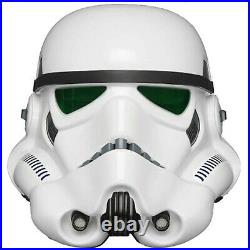 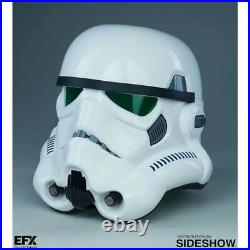 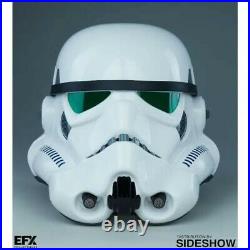 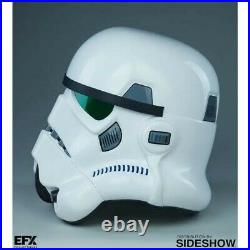 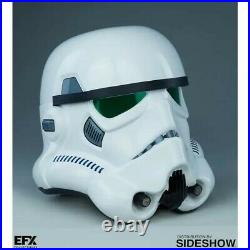 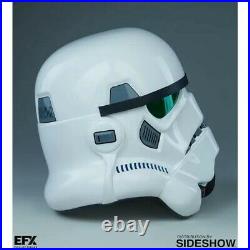 Fearless and unswervingly loyal to the emperor, Stormtrooper are the most recognized symbol of imperial might. Encased in white armour over a black bodyglove, Stormtroopers make up the bulk of Palpatines ground-based armies and the space-based imperial starfleet. Their fearsome looking helmets allow the soldier to breathe in the harshest of environments, including the vacuum of space, and are equipped with long range communications allowing these elite shock troops to be deployed with speed and efficiency to quell insurrections and maintain order across the many worlds of the empire. The distinctive design of the Stormtrooper was originally created by concept artist Ralph McQuarrie in 1975. McQuarrie designed several versions of the look of the empires general infantry. To ensure that your eFX Stormtrooper helmet retained all of the subtle nuances of the hand-sculpted original, our engineers digitally scanned and cast a surviving original helmet to recreate this iconic piece of Star Wars history. There were only 6 known Hero helmets that were made for ANH. Up until now, only the whereabouts of 1 helmet was known. This helmet resides in the Lucasfilm archives. Unfortunately, it was missing some of the components including the lens. (that is why we supplied both green and grey lenses with our Limited Edition ANH Stormtrooper helmet in 2008 since there was no definitive reference picture of whether the lenses was green or grey). Then, just by chance and whole lot of luck! We found a second one owned by a private collector! This helmet was still in perfect condition with all of the components, including the lenses, foam padding and elastic straps! The helmet was in such original condition, that we were able to identify the helmet on screen! It is believed that one of the stormtrooper costumes was worn by Joe Johnston. Well, this is the other one. Not only did this generous collector allow us to take extensive reference photos and measurements of the helmet, but he actually let us take the helmet apart and actually cast the inside to make our own molds! As many of you know, the original helmets were made by vacuum forming ABS over a male mold. Thus, by casting our mold of the INSIDE of the helmet, we have an exact duplicate of the original molds used. To our excitement, the helmet was simply held together with screws. If we came upon parts that were permanently glued together, we would have stopped since obviously, we did not want to take any risk of damaging this priceless prop! Our Legend Stormtrooper helmet will not only replicate the original helmet in process, but all materials, as well. This Stormtrooper Helmet Full-Scale Replica features. Based on an original helmet from the Lucasfilm archives. Episode IV: A New Hope Stormtrooper Helmet. EFX Star Wars Episode IV Stormtrooper 1:1 Replica. Dispatched with Other Courier (5 to 8 days). Please be advised that your order may take longer to receive due to carrier volume issues and increased processing time due to pandemic protocols. Thank you for your understanding and patience. Last of all, please. Track Page Views With. Auctiva’s FREE Counter. The item “EFX Star Wars Episode IV Stormtrooper 11 Replica Helmet” is in sale since Friday, April 30, 2021. This item is in the category “Collectables\Science Fiction Collectables\Star Wars Collectables\Other Star Wars Collectables”. The seller is “zavv_36″ and is located in Birmingham. This item can be shipped worldwide.